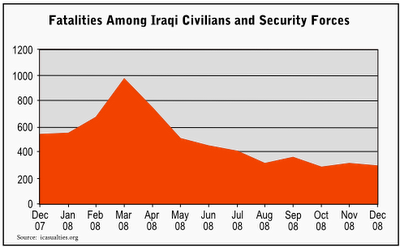 Despite a bloody start to December, the final number of deaths for civilian and Iraqi security forces showed only a slight uptick from the preceding month. Note that my graph is inaccurate, for I accidentally used the figure of 299 which was later updated to 320. I plan a set of graphs representing the entire course of casualties in Iraq during the Bush presidency, and I will use the proper figures for that graph.

As noted above, the slight increase in deaths reflects a fairly smooth transition taking place between the coalition and Iraqi security forces. 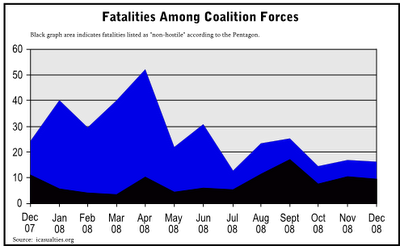 Coalition fatalities in December were almost exactly like those in November, with seven listed as resulting from hostile fire in each month. One less non-hostile fatality took place which resulted in the slight decline. The figure supports the conclusion of a very mild uptick in violence for the month.

We can probably look forward to continued progress if the next president restrains himself from acting hastily. Iraqi security forces continue to require air and logistic assistance. I'm not sure how Obama will classify air support as something other than "combat troops" but the help will be needed however he justifies it. There simply isn't an adequate Iraqi air force for the foreseeable future. Remote-controlled drones may be able to substantially fulfill the role, however.
Posted by Bryan White at 11:57 PM