To assess the truth for a numbers claim, the biggest factor is the underlying message.
--Bill Adair

While wearing out the above quotation from PolitiFact's Bill Adair, I've been looking for statements from Democrats constituting number claims.  Without strenuous effort I've found a number such claims concerning Republicans where the importance of the biggest factor seems to approach nil.  And with just a bit more searching a comparable example from a Democrat turned up.

As a numbers claim this on is a bit more similar to Sarah Palin's statement about U.S. military spending as a percentage of GDP than to some others I've focused on recently.

On with the fact check:


Pressing the case for his proposed 2012 budget, President Barack Obama has repeatedly touted the claim that it would cut deeply into the deficit and bring annual domestic spending to its lowest share of the economy since President Dwight D. Eisenhower.


As I start -- as a start, I’ve called for a freeze on annual domestic spending over the next five years.  This freeze would cut the deficit by more than $400 billion over the next decade, bringing this kind of spending -- domestic discretionary spending -- to its lowest share of our economy since Dwight Eisenhower was President.  Let me repeat that.  Because of our budget, this share of spending will be at its lowest level since Dwight Eisenhower was President.  That level of spending is lower than it was under the last three administrations, and it will be lower than it was under Ronald Reagan.
whitehouse.gov

PolitiFact used nearly the entire portion I quoted.  I included the first few words to help illustrate that Obama's Eisenhower comparison was a central point of the speech, helping to emphasize that the point of the comparison is the Obama administration's notable ability to trim spending.


Obama has used the phrase "domestic spending" or "domestic discretionary spending" when citing the statistic. But you won't find either term in the actual budget from the White House Office of Management and Budget. A spokeswoman in the Office of Management and Budget said Obama was talking about non-security discretionary spending. Furthermore, when Obama said it will "bring" domestic spending, as a percentage of GDP, to Eisenhower levels, he didn't mean next year, he meant by 2015.

So there's some fine print required to understand the president's shorthand.

I wonder if "fine print" that fails to accompany the president's statement in context means that Obama is already dropped down to "Mostly True" ("The statement is accurate but needs clarification or additional information") at best?

So how does that stack up historically? According to a graphic provided by the White House, the 2.1 percent in 2015 would be the lowest level since FY 1961 under Eisenhower, when the level was 2.2 percent. 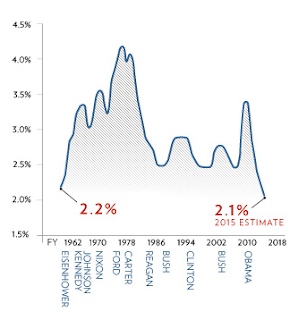 Should we be concerned at all that the evidence all seems to come from whitehouse.gov?


At PolitiFact, we like to see original source documents. So we asked for a link to the historical data that informed their graphic. That doesn't exist.


It is possible to reconstruct a table using data from publicly available information -- see the "outlays" section of this budget data. But believe us, it isn't easy.

The "outlays" Excel sheet only has data going back to 1962.  So how can it possibly confirm the numbers from Eisenhower's FY 1961 budget?  This makes "it isn't easy" look like an understatement.  Any plausible explanation as to how the data might have helped verify the Obama administration claim might have helped despite the reported difficulty of accomplishing the task.


(T)he government does keep historical records on non-defense discretionary spending as a percentage of GDP. And the projection for 2015 using that measure would be lower than any level since Eisenhower.

The linked historical records, as with the previous data set, only go back to 1962 (under the Kennedy administration unless government accounting is even trickier than I thought).  More importantly, the column for "Discretionary" and "non defense" shows a figure of 3.4 percent.  That figure is equaled in 1989 and 1997 before dropping to 3.3 and then lower for a few subsequent years.  The projected figure for 2015 on that page is 2.9--lower than any preceding figure in the column but lacking any comparison to Eisenhower's administration.

After a near-useless interlude where an expert from the Committee for a Responsible Federal Budget confirms the numbers based on his "instinct" (I'm not kidding), we get to the truly interesting stuff:


The budget analysts at the conservative Heritage Foundation, however, say that the White House, in order to arrive at its discretionary figures, used some accounting gimmicks.

Chiefly, they say, the White House reclassified $54 billion of surface transportation spending from discretionary to mandatory spending. Voila, discretionary spending goes down. To find the switch, see the Table S-7 of the White House budget, which notes changes to the budget baselines and specifically quantifies the yearly budget impact from "reclassifying surface transportation outlays."

PolitiFact doesn't mention it, but the reclassification noted above amounts to $61 billion for the estimated 2015 budget.

Figuring in that amount as a percentage of GDP for 2015 would boost the estimated percentage by a little over 0.3 of a percentage point--probably still lower than the still-unverified number from the Eisenhower budget but very close to lows from the George W. Bush and Ronald Reagan administrations.

But, as the Heritage Foundation's Brian Riedl pointed out in the PolitiFact story, future projections are pretty much meaningless when it comes to the president's budget:


"I'm more interested in the numbers for next year," Riedl said.

In 2012, non-security discretionary spending under Obama's proposed budget would come to 3.4 percent of GDP. According to the White House graphic, that percentage would rival the highest levels in the last 20 years or so.

The factoid is hard to check in a literal sense.  The underlying argument that the budget accomplishes remarkable or even considerable deficit reduction is dubious at best.  Much better is the underlying point that freezing discretionary non-defense spending helps reduce the deficit when the economy grows.  Though the latter point is fairly obvious it also represents a generously charitable interpretation of the president's speech.  Probably too generous since playing up an obvious effect that occurs well into the future is nonsensical in the context of an annual budget.


But Obama talked about "bringing" the numbers to Eisenhower levels; he didn't say it would happen next year. So basing the claim on what is projected to happen in 2015 seems reasonable. And almost any way you slice it -- by non-defense, non-security or even total discretionary spending -- if the White House budget projections for 2015 hold up, they would be at the lowest levels, as a percentage of GDP, since the early 1960s at least.

But given that Obama's term ends after 2012 (unless he's re-elected), we think there is some merit to the criticism that "projections" about future reductions to discretionary spending are far less meaningful than the ones proposed for the following year. And, while shifting highway money from discretionary to mandatory spending may make sense, it does skew the picture when making comparisons to previous years when it was considered discretionary. So we rate Obama's claim Half True.

The first of the two concluding paragraphs acknowledges that the claim may be literally accurate if the projection holds up.  While that is "reasonable" so far as it goes, the second paragraph pulls the rug out from under the literal interpretation by noting that future projections that span years don't make a lot of sense in terms of an annual budget.

And now the Palin comparison I foreshadowed earlier.

Palin made a literally correct statement about U.S. defense spending as a share of GDP.  PolitiFact offered an objection somewhat parallel to the one in this case, though in Palin's case there was no reallocation of numbers to pad her case.  There was only the matter (of opinion?) regarding whether Palin's statement amounted to the best measure of defense spending.  Palin received a "Barely True" rating compared to Obama's "Half True."

If the PolitiFact team had gotten around to checking the fact in question then passing grades might have resulted.  But crunching numbers that go back to 1962 can't confirm a comparison with the Eisenhower administration.

I am not counting PolitiFact's inconsistency in comparison to the Palin case against Farley and Hamilton as neither receives a credit for the production of that story.

I've repeatedly taken PolitiFact to task for a loose policy on corrections.  PolitiFact updated this story acknowledging a correction:


Correction: This item was updated to reflect that it was fiscal year 1961 when non-security discretionary spending, as a percentage of GDP, was 2.2 percent. That was Eisenhower's last budget.

Though the correction was prominently displayed at the start of the item (and for that I applaud PolitiFact), the correction obscures the nature of the mistake.  If the year had been identified as 1960 the same correction might have been used.  Using it in this case shields PolitiFact from transparently admitting that it appeared to accept 1962 as part of the Eisenhower presidency when Kennedy was elected in 1960 (as is quite well known).


Given the fact--unacknowledged in the story--that the data from which the factoid ostensibly derives only stretch back to 1962, the error is somewhat understandable.  But it's hard to see how the PolitiFact team could have felt they had succeeded in checking the facts on this one.
Posted by Bryan White at 1:23 AM