Hubert Gaskins (how not to think)

Over the past few days my Twitter experience was marred by the illogical interloping of one Hubert Gaskins. Gaskins, like many others, has mastered the art of illogical thinking, at least as represented by his argumentation on Twitter.

Now. Why waste my time refuted pathetic argumentation by the apparently little-known Gaskins?

Good question. I ordinarily wouldn't bother, but he's proved persistent in tagging me on Twitter so that his ridiculous comments cross my path of vision. That's despite me asking him not to tag me with any more replies unless he fulfills one particular (likely impossible) qualification.

So, if Gaskins persists, my replies will link to this post, which provides all the evidence a person should need to see why I take Gaskins' comments completely unseriously. He's earned it. 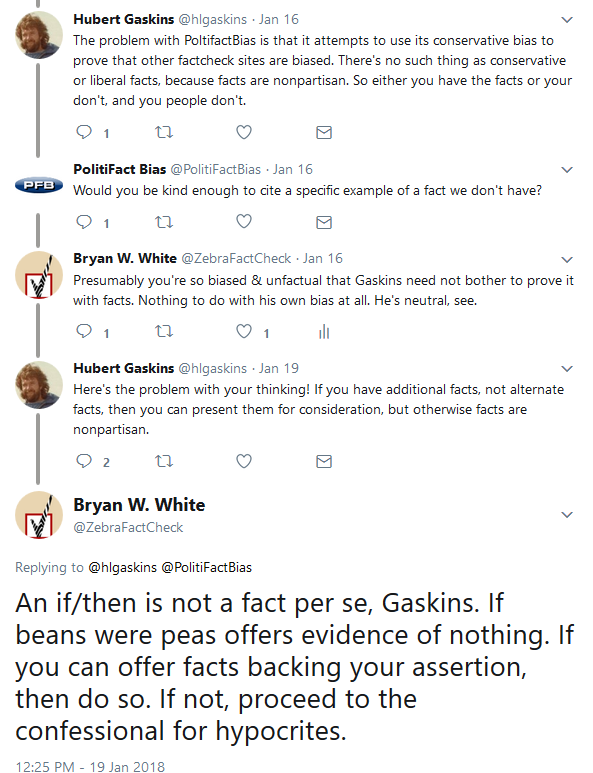 How did Gaskins respond to the encouragement he was given to support his accusations, including a link explaining that the editors of PolitiFact Bias see no utility in criticism unaccompanied by specifics (facts)?

One can only marvel.

Yes, ladies and gentleman, Gaskins responds to the encouragement to provide specifics by failing to provide specifics. He says the very existence of "PolitiFact Bias" proves its bias, implying that Gaskins takes it as axiomatic the neutrality of PolitiFact.com. What other condition could make the existence of PolitiFact Bias an automatic proof of bias? It's hard to imagine that Gaskins gave any serious thought to his claim. 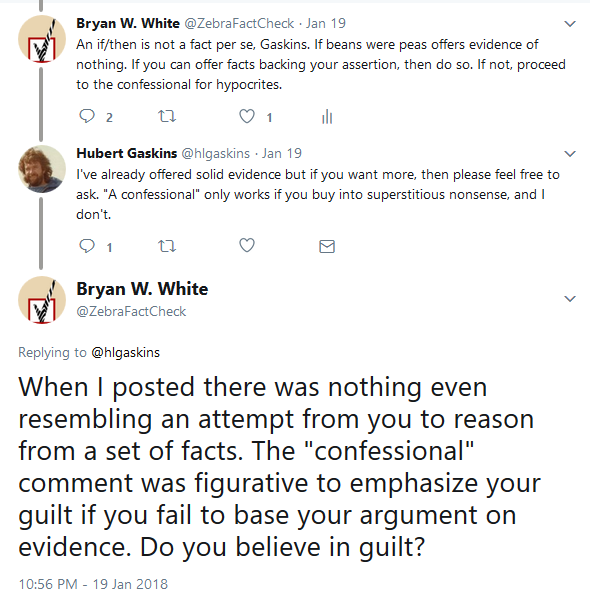 Gaskins goes for the old "I've already offered solid evidence" trick. As though saying it makes it true.

What kind of "solid evidence" did he present? 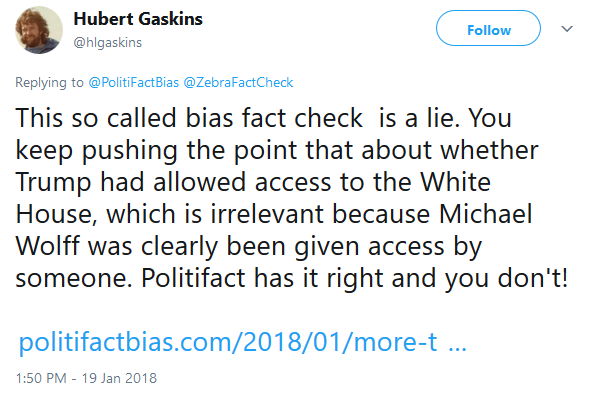 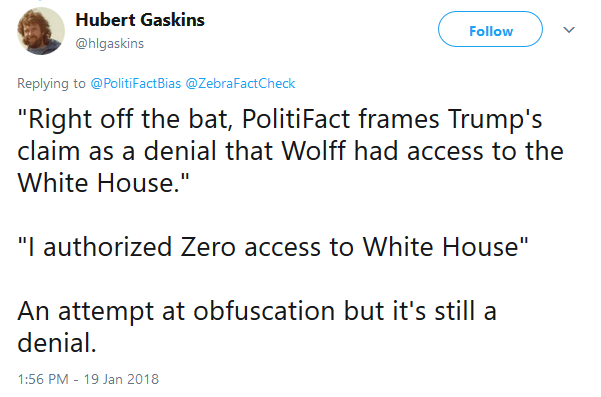 The situation improves only marginally if Gaskins equivocally traded one type of denial for another. Under that condition, Gaskins would make himself a willful equivocator. 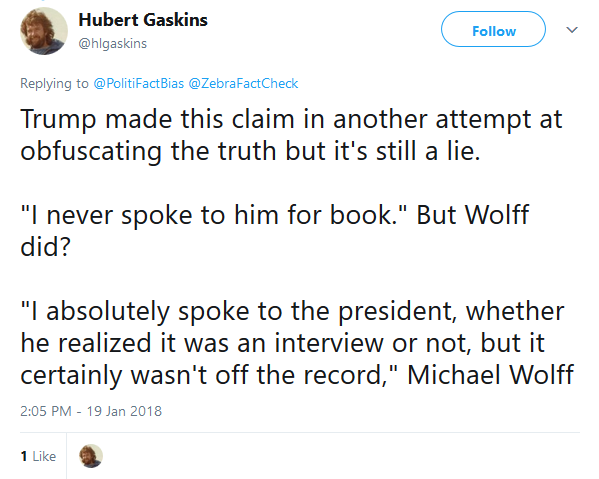 At least Gaskins got a "like" for this one.

Gaskins believes a contradiction exists if Trump says he did not speak to Wolff "for (the) book" and Wolff says he talked to Trump.

Does Gaskins not realize that authors interviewing subjects for a book tend to set up an appointed time for the interview? They don't just talk to people conversationally and then claim to have interviewed them for the book. Gaskins repeatedly displays this skill for ignoring nuance, and displays no apparent realization that people often use true statements to mislead an audience. If Gaskins understands this without showing it in print, then he apparently fails to realize that PolitiFact tends to give Democrats (and Republicans, though to a lesser degree) ratings like "Half True" for true-but-misleading statements. 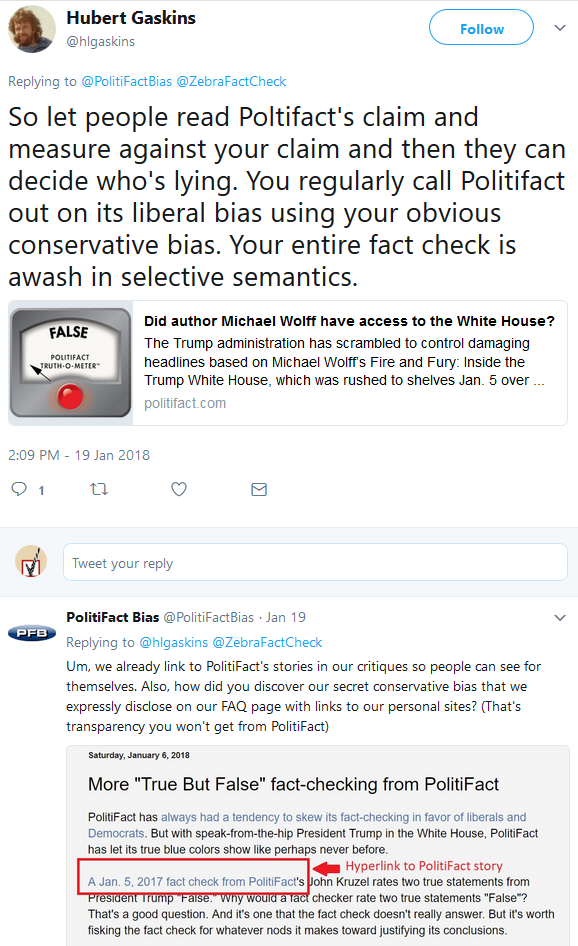 Again, Gaskins' "solid evidence" lacks substance. He charges PolitiFact Bias with "using" its conservative bias to find bias from PolitiFact. How did PolitiFact Bias do this? Gaskins has no specifics. People can look and judge, he says. I agree, and I repeat our challenge to our critics to bring any specifics to our attention. If our critics can't think of specifics then maybe they should re-evaluate.

Gaskins' says the entire PolitiFact Bias article is "awash in selective semantics." With all those "selective semantics" to choose from, why does Gaskins not offer any examples? Is it so hard to pick one among the many that Gaskins finds himself too paralyzed to choose? 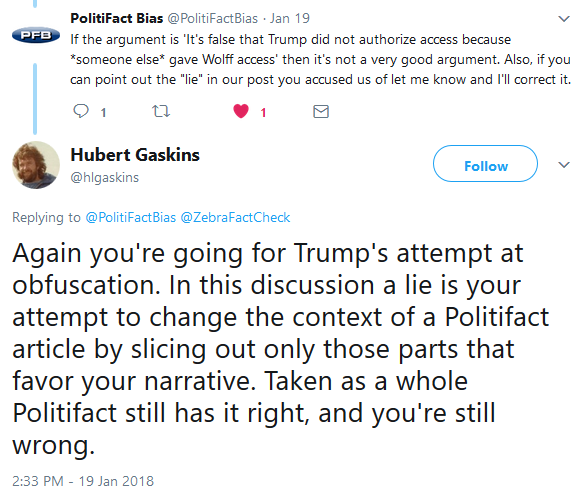 PolitiFact Bias (Jeff D) asks Gaskins for specifics backing his charge. Gaskins replies without specifics. PolitiFact Bias, he says, includes only the parts that favor the narrative. If we left out anything important, Gaskins doesn't identify it.

Gaskins apparently has the energy and enthusiasm to keep up his act forever.

But we find his act justifies taking a dismissive attitude toward his comments.

Posted by Bryan White at 2:38 PM No comments: