Once again it is time for the mid-month fatality update in Iraq. The graph numbers concern fatalities for coalition troops only, and as always please note that the figure for December is a mid-month average of fatalities per day. Thus, the sample size is roughly half that for the other months represented.

I've started keeping track of the accuracy of these projections. Last month's projection was .03 too high, which is a very accurate result for this method. We can call it luck, even though I've been intrepid enough to call these graphs somewhat useful in developing an expectation for end-of-the-month numbers. 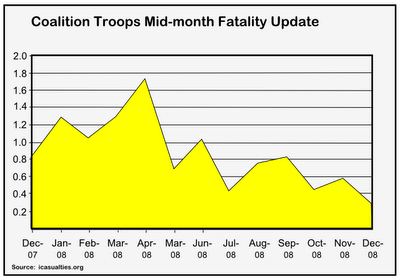 As for December 2008, it has been the best month so far in terms of coalition casualties. The total number of deaths was a mere four through mid-month, with half of them (both from the UK) categorized as "non-hostile."

Because coalition troops are leaving daily operations increasingly to Iraqi security forces, this number is less reflective than usual with respect to the general picture of violence in Iraq. This month has been somewhat more violent than past months thus far, and the violence has fluctuated. The first couple of days, for example, featured a rash of attacks with civilian casualties followed by several days of relative calm.

Coalition fatalities are likely to stay low, but it will be hard to match the numbers projected for coalition troops simply because non-hostile deaths have occurred regularly in Iraq. Civilian deaths figure to go up for reasons already noted, such as removal of travel barriers in Baghdad. The increase will be small if Iraqi security forces are up to the task.
Posted by Bryan White at 3:37 PM