Just moments after I read the Power Line challenge to Time Magazine's defense of Obama's underinflation blowup I ran across PolitiFact's own attempt to rehabilitate the Obama gaffe.

Sen. Barack Obama injected a startling claim into the debate on energy, asserting in a Missouri town hall meeting that the country could save more gas from inflating its tires and tuning up its cars than would be gained from drilling more off its coasts.

"(O)ff its coasts"? I don't remember Obama saying anything about coasts. In fact, here is how PolitiFact reproduced the quotation:

"We could save all the oil that they’re talking about getting off drilling, if everybody was just inflating their tires and getting regular tune-ups."

Fine. Let's allow Lane to run with it and see where he goes.

The best estimate available, by the National Highway Traffic Safety Administration, is that at least a quarter of drivers are cruising around on under-inflated tires. In April, the Rubber Manufacturers Association, the Auto Club, the California Highway Patrol and Yokohama Tire Company used those statistics, along with Department of Transportation and Automobile Association of America data, to extrapolate that 2.8-billion gallons of gas are lost every year due to under-inflation of tires.

That’s an estimate, to be sure, and not one from a published, peer-reviewed study. But remember, Obama said we “could” save all the oil available from offshore drilling in the protected areas — not we “would” — so if the claim is merely plausible he’s on solid ground.

Lane makes a quick transition from the NHTSA estimate on tire underinflation--a reasonable estimate with some research data in support--and the supposed group effort extrapolation of the data. The fact that it isn't from a published, peer-reviewed study is the very least of its problems. Lane, if the references provided along with his analysis are any indication, drew the estimate from an automotive message board. I cannot tell how he was able to firmly identify the aforementioned organizations as the source of the estimate.

We may have been misled as to the source of the data. I found the same data here minus the attribution suggested by Lane. And here is the key statistic:

● According to the AAA Gas Watchers Guide, there could be up to a 10 percent loss of gasoline from vehicles with tires underinflated from 7-10 psi.

I can't find this information in either the 2004 or the 2007 version of the AAA Gas Watcher's Guide, and even if I could the statement is too ambiguous to be of much help. It mentions "tires" plural might lead to that 10 percent loss. How many tires? Two? Three? Four? It's relevant because the bulk of the NHTSA survey's 27 percent of cars with underinflated tires had one tire underinflated (by 8 pounds psi or more). Yet Lane presents this apples-and-oranges guessedimate as though it is not simply a load of hooey. Please note that the 10 percent figure is presented as the ceiling figure ("up to a 10 percent loss"), and then that figure is used as the basis for the extrapolation that gets us to the key estimate of "28 billion gallons of gas" per year (assuming the "per day" version near the end was simply an oversight).

Inflate tires according to manufacturer recommendations. Under-inflated tires are a safety hazard and can cut fuel economy by as much as 2 percent per pound of pressure below the recommended level.

This figure can easily get us above the 10 percent figure that Lane ends up touting, but once again it remains unclear how many tires would have to be low for the estimate to apply. The federal government figures, fortunately, shed some light on that picture:

While the government Web site helps make clear that the fuel economy loss estimates are for low pressure in "all four tires" and varies substantially from the AAA estimate, even this information has a flaw that inhibits our ability to use it effectively. What is the baseline? Where does the 3.3 percent figure come from? If we use the government's .4 percent estimate, the figure of 3.3 percent appears to come from assuming all four tires inflated 8 psi below the recommended level (o.4*8=3.2; a close match). But the NHTSA estimate for tire underinflation absolutely will not support the extrapolation that Lane accepts on behalf of PolitiFact. Lane ends up using the government figure in this entry, but omits that it applies to underinflation of all four tires.

Click to enlarge the image below for additional analysis of Lane's poorly chosen source. Added comments have red emphasis. 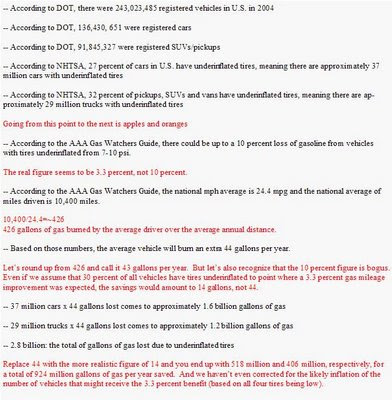 So how much oil is available offshore? According to the latest assessment from the Minerals Management Service, the mean estimate of undiscovered technically recoverable crude oil in the Outer Continental Shelf areas that are currently under moratorium is about 18-billion barrels (see here.)

Without ANWR and domestic oil shale, then, in just 18 years tire inflation in our still overly optimistic scenario could save about 18 billion gallons of gas. At 19 gallons of gas per barrel of oil, that sounds pretty much like a drop in the bucket.

But it couldn’t all be extracted immediately. The agency estimates that if the moratorium were lifted production could start by 2017, and by 2030, oil companies could be producing 2.4-million barrels of oil instead of 2.2-million. That’s 200,000 more barrels per day.

And remember, an estimated 2.8-billion gallons of gas are lost annually due to under-inflated tires.

As Hinderaker points out, higher oil prices tend to lead to more aggressive extraction of easily accessed resources. The 2.4 million barrels figure is probably low unless oil prices drop way below present levels. And the true comparison is not to 2.8 billion gallons of gas saved but to under 1 billion. Offshore drilling minus ANWR and other sources should top maximal tire inflation saving annually by a long shot.

All of the numbers in this analysis are estimates, we should emphasize. Oil industry experts told us estimates of the amount of oil offshore and how fast it could be extracted vary widely, and the Energy Information Administration’s number is fairly optimistic. Likewise, it’s highly unlikely any public awareness effort could change behavior enough to save 2.8-billion gallons of gasoline per day.

I'd like to see Lane's notes as to what exactly was optimistic about the EIA estimates.

But I'll tell you one thing that was optimistic. PolitiFact's grading of Obama's statement as "True." Lane showed himself inept by accepting the figures he found online. Editor Scott Montgomery should have buttonholed Lane until he located the supposed report that everyone from AAA to Yokohama Tire cooperatively produced. The source report should have accompanied the story, not a link to a message board page. Because the numbers fared so poorly under scrutiny, it seems likely that Lane was fooled into thinking the analysis came from people who know what they're talking about when that almost certainly was not the case.

But it’s clearly within the realm of possibility that tire inflation and tune-ups could save more than offshore drilling could produce. So we find Obama’s claim to be True.

What an embarrassment to journalism.

Correction: Made that 3.2 instead of 3.4 in the equation I used to recreate the thinking process behind the 3.3 percent loss in fuel economy. To paraphrase Xander Harris, to add makes our doing math good.

Update:
PolitiFact updated their entry, and I posted a response.