The Rangers rode good-enough pitching, timely hitting and a bit of help from the home plate umpire to salvage the third game of a three game series against the Rays with a 6-3 win.

The officiating perhaps was not the key to the game, but it was frustrating.

In the top of the sixth inning, designated hitter Eric Hinske was called out on strikes following a pitch that appeared well outside the strike zone. Hinske questioned the call ("What?" "That was a foot outside!") and was tossed from the game after he had started away from the home plate umpire back toward the dugout ("******' ********!"). The red indicates my fairly confident renderings of Hinske's take via lip-reading.

It was then that I discovered Gameday's latest innovation intended to protect the umpires from having their work questioned by fans. Whereas under last year's system I could click on any inning and obtain the graphic for any at-bat, the current system appears to have disabled that feature. But I got a screen capture of the called third strike on Carl Crawford--the one that ended the game with two on and two out. 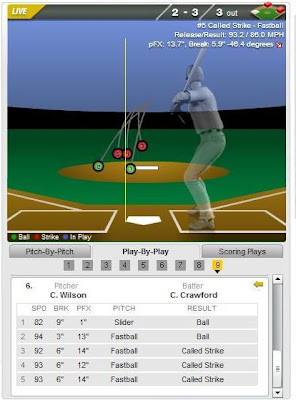 I added the vertical yellow line to help illustrate that the third called strike appears distinctly outside the strike zone (unless you're the umpire). But you may be wondering "What about that first pitch? That ball looks like a strike." Good point. The problem is that the Gameday set up was showing low pitches up over the hitters' knees for some reason. Akinori Iwamura got called out on a third strike right about the spot where that first pitch is mapped. The pitch appeared low.

All in all, the Rays did not play well enough to win, so the criticism of the umpire constitutes an interesting diversion.
Posted by Bryan White at 8:19 PM