With the win, the Rays took a 2-1 series victory over Baltimore and closed to within 3 games of the fourth-place Orioles.

I hate the Orioles just a tad less than the Yankees and the Red Sox.

The Orioles, though they occasionally splurge like New York and Boston, rarely look much better than the Rays on paper, but they still beat us up pretty well--especially the past two years. While it was very satisfying laying a thumping on them, I have some sympathy for the birds this time out.

The umpire was terrible. 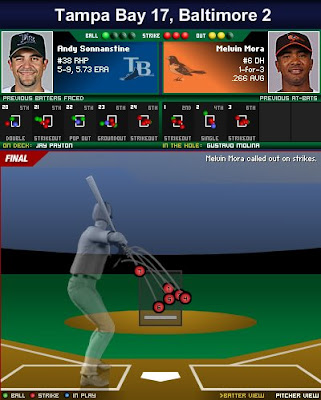 While not as graphically impressive as the Johnny Damon at-bat I highlighted a few nights ago, the Sonnanstine strikeout of Melvin Mora was highway robbery. Note the position of pitch no. 7, high in the "strike zone" of the graphic and running in the right-handed Mora. While it doesn't look so bad in the graphic, the position of the ball in relation to the cartoon batter is pretty realistic. No matter what the rules call for, umpires rarely call a strike over the belt. This pitch was up higher than Mora's navel, I'm sure. Using my rudimentary lip-reading skills, I saw Mora inform the umpire "That was high." I agree with Mora. The umpire disagreed.
But at least he didn't throw Mora out of the game.

So cheer up, Baltimore fans.

I should add that Mora wasn't the only one complaining during this game. All the bad calls I saw went against Baltimore--not that I was paying close attention. I'd mainly look in on the action when the excitement of the local announcers indicated yet another hit for the Rays.
Posted by Bryan White at 10:25 PM